You are here: Home1 / Transparency 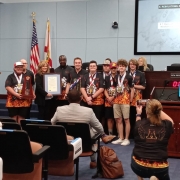 Last Night’s Brevard County Commissioners Meeting got quite heated on multiple occasions over multiple topics. But it was fairly short, sweet, and to the point.

Titusville’s Astronaut High School Bowling team was recognized for their achievements at State and National Level. They were recognized a few weeks ago at the Titusville City Council also. Great Job Team! Immediately following this, the room got heated and stayed heated for the remainder of the night. Even Fox 35 news was there to film the situation.

Consent Agenda was passed next: 3 items were pulled, and the rest passed quickly. Here is what passed.

-a request to gets bids for the South Beaches waste water treatment facility repair.

-Accept a grant for Valkyria airport.

For those following the Snug Harbor and South Cocoa Beach Fire Service issues, they were attempted to be solved last night. Patrick Space Force Base has entered into an auto aide agreement with the area. Thus giving them the coverage they have been requesting for a while now. Patrick Space Force Base will host a ceremony and public relations moment with the county. But the Space Force will be the ones now taking care of Snug Harbor and that area.

COVID-19 Administrative Leave Policy: Yes, we challenged this one. For those who need a quick background. This policy would give every county employee who gets covid 19 AND has the vaccination, 80 more hours of paid leave. Paid for by tax dollars. The idea was to incentivize employees to get the vaccine. However, the money used is tax dollars. So, I am sure you can see the ethical issue in this scenario. We are, whether intentionally or not, planning on taking tax dollars from people who believe in 1 side and giving that money to people who believe in the other side. Strictly based on their belief and their choice. That is a problem. You want the vaccine? Fantastic. You don’t want it? Fantastic. It’s your choice. However, giving money out to one group, that comes from both groups is a massive violation of principles.

Rita Pritchett questioned the financial ability of the county to handle this. Christine Zonka felt the inclusivity of the program was wrong, especially since none of the vaccines are even FDA approved yet. She suggested returning with the topic after FDA approval. Commissioner Smith said at this point, that incentive isn’t going to change anyone’s mind. People have already made up their decisions of whether they trust the vaccines or not. Bryan Lober said that 96.7% of medical professionals have gotten the vaccine. So that’s good enough for him. Mrs. Haines came and spoke and angrily compared the commission to Nazi Germany for even suggesting it. Lober took offense to this. Commissioner Tobia got very upset on this item and called those that do not believe in the science morons. Specifically calling out the Brevard County Firefighters who only have a 27% vaccination rate. The Department of Health was called up to give a quick update during consideration. They updated that our viral infection was 575 out of every 100k last week. So basically, 3500 people in Brevard tested positive last week. She claimed this was ‘off the charts’ and that Brevard was on the higher end of infection rates. Commissioner Zonka asked her to compare that with Brevard’s vaccination rate. She said our vaccination rate was 58% currently. We are one of the highest vaccinated counties. And still skyrocketing so we need even more vaccines to be passed out.

At the end of this 35-minute deliberation, the Commission voted 3-2 to deny the program. District 2 and District 3 voted to move forward. Districts 1,4, and 5 voted against it.

The third consent agenda item pulled was the crosswalks in Satellite Beach. Commissioner Smith is sending a letter to FDOT to install flashing yellow lights into the actual roads and not just those little signs on the sign. He explained that he had experienced them in the Keys and thought it would help with the crosswalk issues in Satellite Beach.

Next, Solid Waste fees and charges were increased. Even after last meetings argument, we still had to approve the increase per the contract.

US 192 improvements were approved.

District 4 was the first District to implement projects using the American Rescue dollars separated at the last meeting. Kurt Smith is using ARPA funding to convert 142 homes in South Central Brevard from septic to sewage.

Brevard County sold 10 acres of land in Viera to Florida Power and Light to build a new sub-station.

The law about cats and dogs becoming a nuisance was changed from 30 minutes to 15 minutes and removed the intermittence. So, if your cats and dogs bark or meow for 15 total minutes, it is now illegal. Kurt Smith did explain that he worked with animal control to restructure this law because the wording wasn’t correct. However, they did more than fix the wording, they changed the time too.

Next, they fixed the wording on dog bite laws. They were missing the word stitches or sutures.

Then, John Tobia led a discussion on the complex Café owner Mr. Steven Powers who came in last meeting, lied to the Commission and possibly committed fraud. Commissioner Tobia had a lot of not so nice things to say about this man who screwed over his tenant lady that was sub-leasing the cafés. It was a horrible situation in which at the end of the day the commission has to follow specific laws for advertising, but they are hoping this lady can reacquire her cafés in the government complexes.

Next, the conversation got even more heated with the allocation of District 3 ARPA funds. After losing the Vaccine incentive of paid leave, Commissioner Tobia proposed to use his allocation of the ARPA money that he has discrepancy over, to give out bonuses to Brevard County employees that have received their vaccine or get their vaccine in the next 30 days. Commissioner Zonka said this fundamentally is wrong and she absolutely disagrees with it, however it is legal and he has full discrepancy to do what he wants with his allocation. She said 2 weeks of pay as a bonus just for getting a vaccine has fundamental ethical problems and wanted to be very clear that she stood against it. However, she still voted for it because it is up to him what he does with the money. (Let me pause to say this, “Bad men need nothing more to compass their ends, than that good men should look on and do nothing.” -John Stuart Mill) If you really truly believe that your neighbor is doing something ethically and morally wrong, and you have the power to stop them, I suggest you do so. Especially if you gave them the money in which they are committing that act. At the end, the commission voted 5-0 and approved his request. So, if you are a county employee who did not receive the hazard pay AND you have received your vaccine, you can get a monetary bonus.

Board reports had nothing extreme, other than Smith’s 161.5 miles trek on a Jet Ski. Which is quite impressive. UNTIL, Rita Pritchett announced she was extending the vote for fluoride injection in Mims 4 more weeks. “Not enough people have gotten involved to make a good decision. Only about 1/3 of Mims residents have voted”.